Model 204 defines four "critical file resources," which are used to serialize access to important file structures. The names of these resources and the resources that they control are: 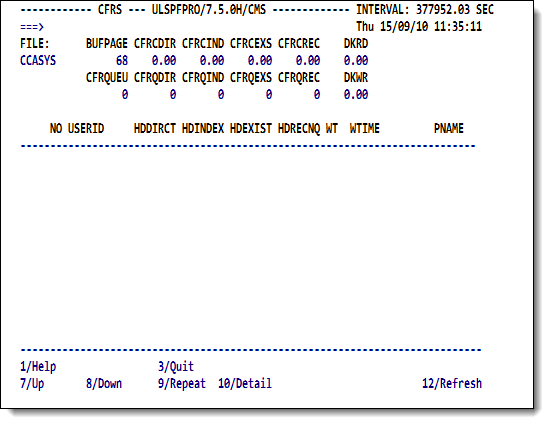 This display is accessed from any file monitor screen in SirMon (including custom user-defined screens) by pressing the PF2 key with the cursor on a line containing file statistics. The Critical File Resource conflict display is not available in the RKWeb interface.

The top section of the CFRS screen displays a variety of file-related statistics (described in Critical File Resource statistics displayed in SirMon) showing the rate of conflicts and the current length of the queue of users waiting for each of the four critical file resources. Disk reads and writes (DKRD/DKWR) are also displayed, as are the total number of the file's pages currently in buffers (BUFPAGE) and the total number of users queued, waiting for any critical file resource for the file.

The lower portion of the screen displays users who currently hold enqueues on critical file resources for the selected file, and the type of enqueue each is holding. In addition, WT (WAITTYPE), WTIME (the length of time the user has been waiting) and PNAME (the procedure being run by the user) are displayed for each user.

Critical file resource conflicts and enqueuing problems are always a second-order effect indicating some other bottleneck. For instance, long queues of users or high numbers of conflicts on the resource called INDEX might point to an inefficient SOUL program that is unnecessarily locking up a file's index pages.

Note: Users waiting in queues, but not holding enqueues on critical file resources, are not displayed here. They can be seen in User Monitor displays showing WAITTYP and WAITTIM.

WT is a numeric code used by Model 204 to indicate the type of wait a user is experiencing. WAITTYPEs 24 and 25 indicate a wait on a critical file resource. SirMon displays the WT statistic as a two-digit code, ordinarily the numeric wait type. However, codes 24 and 25 are displayed as two alphabetic characters: