This topic gives the application programmer an overview of the IFAM1, IFAM2, and IFAM4 Model 204 environments that support HLI processing.

This topic presents the factors that determine the type of job to run using the Model 204 Host Language Interface facility. Each type of job provides certain processing capabilities within a particular system environment.

See HLI: Transactions for more information about enqueuing and recovery in the HLI processing environment.

An IFDIAL thread provides a line-at-a-time terminal type interface between Model 204 and a host language program that is running in batch. An IFDIAL connection allows an HLI application to issue commands (such as LOGWHO, MONITOR, and LOGCTO) and run SOUL requests, and to receive responses from Model 204.

An IFSTRT thread provides a user interface between Model 204 and a program that uses the Host Language Interface (which runs in batch).

IFSTRT protocols allow an application that is written in a host language to issue calls to Model 204 that perform functions against the database which are similar to Model 204 commands and SOUL statements.

With a multiple cursor IFSTRT thread, the file, set, or record that is specified in the HLI call is the one that is current for processing. In contrast, the current item to be processed on a single cursor IFSTRT thread is always relative to the last file opened, the last set created, and the record last referenced.

For an application that requires access to multiple files concurrently, Rocket recommends that you use a multiple cursor IFSTRT thread and that you do not run a multithreaded job (IFAM2 or IFAM4).

The Host Language Interface facility is supported in the IFAM1 configuration running under an z/OS, VSE, or CMS operating system.

IFAM1 supports a single program (that is, a single user), in a single region (that is, the IFAM1 job runs in a region that is separate from the Model 204 Online region using a private copy of Model 204), using a singly-threaded connection (that is, using one thread, either IFSTRT or IFDIAL).

IFAM1 provides the most efficient system access which is useful for testing program modules and applications.

IFAM2 supports one or more programs (that is, multiple users sharing the same copy of Model 204), running in separate regions or machines or partitions (that is, the user program runs in a separate region from Model 204 requiring communications between the regions), using a multithreaded connection (that is, using one or more threads, and except for IFDIAL under CMS, can be both IFSTRT and IFDIAL threads).

Note: A batch utility program, BATCH2, is provided by Rocket for use in the IFAM2 environment. For information about the BATCH2 utility, see BATCH2 facility.

For more information about IFAM2, see IFAM2 configurations, below.

The Host Language Interface facility is supported in the IFAM4 configuration running under the z/OS operating system.

IFAM4 supports a single program (that is, a single user), running in a single region (that is, the user program and Model 204 run in the same region), using a multithreaded connection (that is, using one or more IFSTRT threads).

IFAM4 provides the most core-efficient way to run a multithreaded HLI application and is useful in certain test and batch production situations.

Setting up an HLI job

You must set up your HLI job for the particular Model 204 configuration (that is, IFAM1, IFAM2, or IFAM4) in which it will run. To connect to Model 204, the job references a particular link module or set of link modules.

Each of the HLI protocols may be used in several different Model 204 configurations as summarized below.

The following diagrams of HLI application processing in the IFAM1, IFAM2, and IFAM4 configurations show the basic components of each configuration.

In IFAM1, the HLI batch application program and Model 204 run together in the same region, which is separate from the Online region. There are two basic configurations of the IFAM1 processing environment, one for z/OS and VSE, and one for CMS.

Note: The Model 204 system manager must build the IFAM1 link with the IFID module included for a user to allow an HLI program to access Model 204 using an IFDIAL thread. 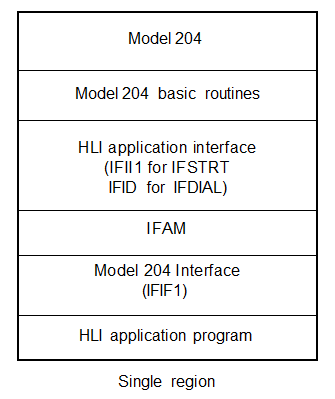 The following figure shows the logical view of the IFAM1 processing environment for an HLI application running under CMS.

The HLI application program is loaded to include a library (not shown) that contains the IFIF1 object module (IFIF1CMS) which must be linked to the program as shown below. The following figure shows the saved segments in a common storage area separate from the user's CMS application. 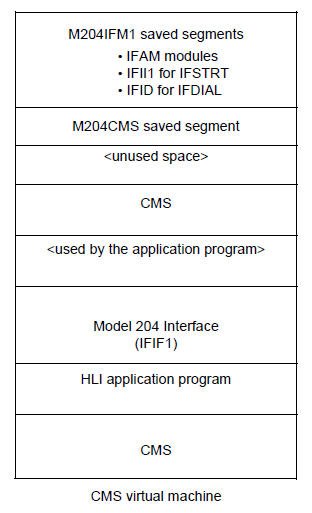 In IFAM2, the HLI application program runs as a job in a separate region from Model 204, sharing a copy of Model 204 with other users who access the database from host language and SOUL applications.

There are two basic configurations of the IFAM2 processing environment, one for z/OS and VSE, and one for CMS.

Logical view of IFAM2 under z/OS and VSE

The following figure shows the logical view of the IFAM2 processing environment for an HLI application running under z/OS or VSE.

The figure shows the following components:

IFAM2 under z/OS and VSE 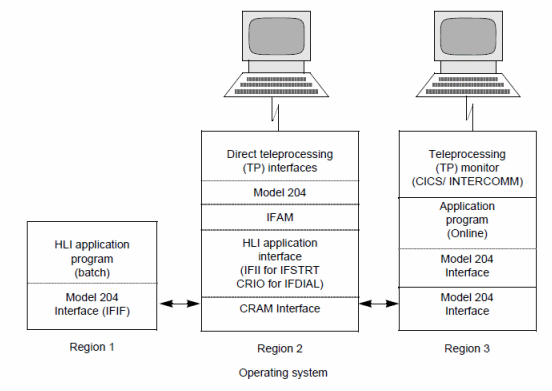 The following figure shows the logical view of the IFAM2 processing environment for an HLI application running under CMS.

The IBM inter-user communication vehicle (IUCV) allows a host language program running under CMS to communicate with a Model 204 system running in a separate virtual machine under CMS.

The HLI application program is loaded to include a library (not shown) that contains the following object modules (shown in IFAM1 under CMS) which must be linked to the program: CMIF, IFIF, IFCM, and IUCV.

As the following figure illustrates: 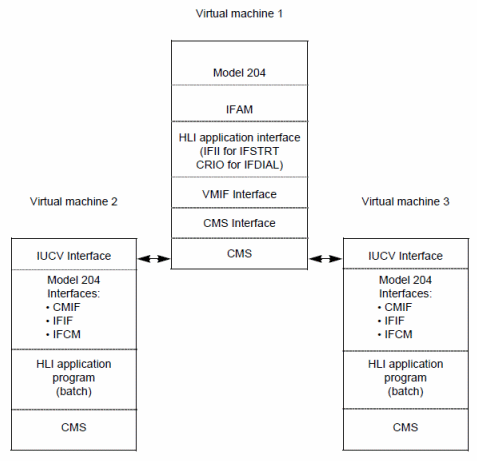 There is one basic configuration of the IFAM4 processing environment, for z/OS. The HLI application program and Model 204 run in the same region as separate subtasks of a single batch job.

Logical view of IFAM4 under z/OS

The following figure shows the logical view of the IFAM4 processing environment for an HLI application running under z/OS. 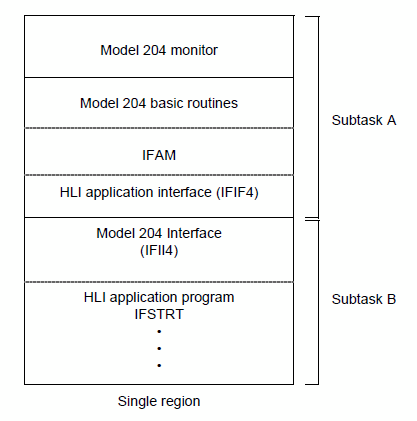 In many cases, applications written to operate with the Host Language Interface in one Model 204 environment require little or no change to operate in another environment.

Before you can run a host language program with any version of the Host Language Interface, you must link-edit it with one or more Model 204 modules. In general, you can convert a host language application program which runs in one environment to run in another by linking the appropriate interface module.

Use the guidelines in the following sections to convert HLI applications to run in the different Model 204 environments that support HLI processing.

Note the following restrictions on converting applications that use different call protocols or different types of threads:

Converting an IFAM2 application program that uses IFSTRT threads to run in IFAM4 does not require recompilation of the IFAM2 program. Only the interface module changes.

Note: IFAM4 applications cannot use IFDIAL. You cannot convert an IFAM2 application program that is using an IFDIAL connection to run in IFAM4. See Applications that require coding changes.

Applications from IFAM4 to IFAM2

Converting from IFAM4 to IFAM2 is useful for allowing multiple applications or copies to share a single copy of Model 204.

There are differences in using certain calls in the different environments. For example, there are two different forms of IFSTRT (using different parameter lists); one is for IFAM1 and the other is for IFAM2 and IFAM4.

In general, you must modify an application program to convert the following types of HLI applications (using IFSTRT threads):

Use the following guidelines when converting to or from IFAM1:

See HLI functions for information about individual calls and their usage.