SOUL uses object swapping to handle cases where a request has more objects than the compiler has reserved VTBL/STBL space for. Object swapping involves the managing of server-resident slots — object-instance "containers" — and the swapping of object instances between those slots in the server and pages of CCATEMP. This scheme combines extremely efficient access to object data with a modest memory requirement, and it may even produce smaller server sizes than comparable non-object applications once the code that uses those object classes is considered.

The subsections that follow discuss SOUL object swapping, the compiler directives that let you exchange object swaps for server table space, and statistics that report both swapping and server space allocation:

SOUL objects effectively live in VTBL (and STBL) and in CCATEMP. The compiler reserves VTBL/STBL space for only a few object instances for each class that is referenced in a request. At run time, these object-instance slots are used for the objects instantiated in the request. If the number of objects instantiated exceeds the compiler-allocated slots, the swapping of objects out to CCATEMP begins.

The least-recently-used objects get swapped out. If such an object is referenced again, it gets swapped back in, probably pushing another object out. No server or CCATEMP space is kept for objects discarded explicitly or implicitly.

Unfortunately, although object references are easily tracked during compilation, it is impossible to determine the right number of object instance slots to reserve in all but the simplest programs. Guessing the size of the "normal" working set of object instances of a particular class requires knowledge of what the program is doing and what its inputs are expected to be. Using the count of object references is not sufficient: In one program, all object references may point to a single collection object, for example, whereas in another program, each object variable may reference a different object.

Because there is no right number of objects to allocate at compile time, the SOUL compiler directives, discussed below, are provided to allow a programmer who is more aware of the likely performance requirements of a class to set the correct number of objects programmatically. In most cases these directives will not be necessary: most simple object-oriented applications have few objects, so swapping will be minimal. And even in complex applications where swapping is greater, the directives should be a recourse only if performance degrades intolerably.

The MaxObjects, MinObjects, and AddObjects options of the Sirius compiler directive adjust the number of SOUL objects for which VTBL/STBL space is allocated at request compile time.

By default, that is, with no object compiler directives specified, SOUL allocates space for at most three (usually two) objects per class per request. This ensures that only a small amount of server table space is used for objects, and no object swapping occurs until more than two or three objects in a class are instantiated at the same time. This approach also prevents an exceptional, object-heavy request from forcing server tables to be huge for all requests.

For details about the calculation of the space allocated for an object, see the description of the components of the object statistics in Message format.

Contrast the default allocation behavior with a scheme designed to maximize performance, in which one object is allocated for every object reference in the request. This high-allocation approach eliminates most object swapping, but it is likely to allocate considerably more server space than is necessary for most programs. An extreme example of this is an application that has dozens of object variables, especially object variable parameters, that all reference the same object. In this case, VTBL/STBL space would be allocated for dozens of objects, yet most of the space would be unused.

You can adjust the allocation behavior by specifying one or more Sirius compiler directives in your program. You locate the directive after the Begin statement; directives referencing a user-defined class must follow the class definition. The directives have the following format:

To see the effects of the compiler directives, consider the object allocation report shown in "Sample object statistics". Those statistics (invoked by the OBJSTAT parameter) show object handling when no compiler directives are specified. Note the relatively high swapping counts of the LONG, PT, and CELL objects:

The output from a T REQUEST command issued in that situation includes the following statistics:

In an effort to maximize performance in this case, the following compiler directives are set to allocate space for more of these object instances in VTBL (they are not using STBL), thereby reducing swapping:

After rerunning the program, the resulting OBJSTAT statistics show the swapping eliminated (at the expense of additional VTBL space):

The T REQUEST output shows reduced CPU, increased VTBL consumption, and no OBJSWAP value (indicating that there was no swapping):

How the compiler options interact

If multiple directives are specified in a program for a class, this section describes rules for calculating the actual number of object instance slots for which the compiler allocates VTBL/STBL space.

These are identifiers for the critical values taken into consideration in the rules that follow:

The following rules describe the compiler allocation outcomes when combinations of directives are specified for a class: 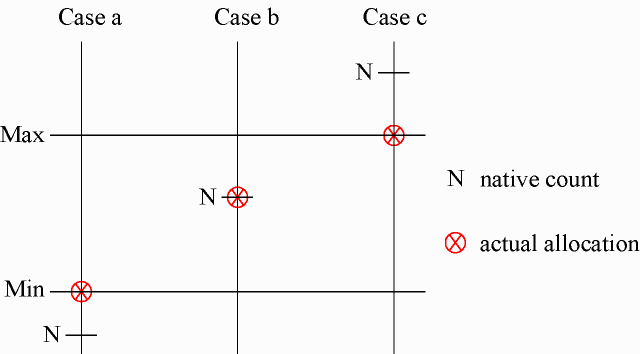 Cases a, b, and c in the figure above are those described in rule 4, above. The figure shows that, if a combination of MaxObjects, MinObjects, and AddObjects compiler directives are specified, the actual object space allocation in VTBL you get depends on how the compiler's Native count (N) of the needed object instance slots compares to Max and Min, the effective MaxObjects and MinObjects values.

Sites that feature user-created classes can economize on server space consumption by modularizing their application code and by including user method definitions only if the methods are actually called.

SOUL classes incorporate a "header file" type of design: the declaration of classes is distinct from the code that implements the classes. This separation will let you package user classes in multiple procedures, one or more of which contain the declaration of the class definitions, while others contain the code for the various methods. Although the compiler needs the complete declaration to compile references to members of each class, the code that implements functions and properties need only be included if it is actually used in a particular procedure in the current compilation.

With this approach, you can avoid the extra server space accumulated by multiple includes of the same definition or method code within a single compilation of a complex program. You can even programmatically prevent such duplicate includes by using the !DUPEXIT SOUL macro.

The OBJSTAT User 0 parameter controls the display of journal messages that contain user statistics about SOUL object usage per request. The messages specify server table usage (VTBL and STBL) and object-swapping counts per object class and summed for all classes.

OBJSTAT is a typical Model 204 bitmask parameter that is also per-user and resettable. It contains the following bit options, two or more of which you can select by specifying the sum of their bit values:

With OBJSTAT set to X'33', the following SirScan AD-line output displays after including a procedure that manipulates some objects. The post-compilation individual-class statistics and all-class totals are followed by the post-evaluation statistics and totals.

For a case where these statistics guide the tuning of the object allocation algorithm, see A MinObjects example.