As of Model 204 V7.5, the functions and facilities necessary to run SirScan are built into the Model 204 kernel. For versions of Model 204 before 7.5, the installation of the Sirius Mods is required and sufficient to install and run the SIRSCAN subsystem, the SirScan engine.

In addition, optimal results using SirScan require your attention to the settings of:

The "background" subsection below describes some native limitations in selecting and formatting journal entries that are remedied by functionality controlled by two User 0 parameters.

The Model 204 journal records contain only a user number and do not contain other potentially useful identifying information, such as user ID, terminal ID, or IP address. So when SirScan scan specifications in the SIRSCAN subsystem are based on things like userid, IP address, or port name, there is often no way to determine whether a single journal entry is associated with the requested attributes or not.

In very early versions of the product, selection criteria based on userid would only work for currently logged on threads, and then only for journal entries from the current session. This is because, for logged in users, SirScan can determine user number and login time. From these two pieces of information, it can be sure that all journal entries for the thread associated with a requested user ID, and with a date/time stamp after the login time of the user, are associated with that user.

Outside of being very limiting — it was impossible to select journal information based on userid for non-logged in users — SirScan could also produce anomalous behavior in auto-refresh mode. Because SirScan only collects data from the previous end of the interval when in auto-refresh mode, if a userid that was present and selected in a previous interval logged off before the data is refreshed for the new interval, none of the journal records for that user would appear between the end of the previous interval and the end of the current. Outside of the annoyance of not seeing the expected data, this could cause confusion among SirScan end-users, because a user's journal entries might seem to suddenly stop without a logoff record or any other hint as to why.

In a similar way, SirScan could use the MSIR.0114 message, which indicates a Janus port and client IP address for any Janus server request, to associate a thread number with an IP address and port name. Unfortunately, while this approach makes it possible to use non-thread-number and non-thread-type based selection criteria for sessions that are no longer active, it also makes SirScan's behavior even more anomalous and confusing: whether or not a journal record is selected might depend on whether or not SirScan happened to see an identifying message in the journal for that thread. For example, if user MOE was logged on from 8:37 to 11:43, and a request for MOE's records is made for the interval 8:38 to 9:30, none of MOE's records are seen. But if the selected interval was 8:37 to 9:30, they are all seen.

To fix the anomalous behaviors, SirScan now uses "heartbeat" messages: RK type audit messages that contain identifying information about a thread such as userid, terminal ID, and IP address and port number for Janus server threads. The heartbeat messages are controlled by the SCANTIME system parameter. And the SCANPARM parameter ensures SirScan's detection of the login of Janus Web Server threads.

If SCANTIME is set to a non-zero value, the SIRSCAN subsystem detects this and, on the scan specification screen, gives users the option of reading an extra SCANTIME seconds on every interval collected from the journal. The extra SCANTIME seconds read are before the start of the requested interval. While the data from the extra SCANTIME seconds worth of journal entries is not formatted, it is scanned for the heartbeat messages, and any information in those messages is saved for each thread. In this way, all messages for all threads after the start of the requested interval can be deterministically associated with a userid, terminal ID, and IP address and Janus port for Janus server requests.

Since journal messages tend to be bunched (when a thread gets one audit message logged it is likely to get several around the same time), there is probably not a significantly higher cost to a relatively small SCANTIME, like 10 or even 5, than to a much larger one, like 60. On the other hand, the amount of extra work performed by SirScan associated with the extra SCANTIME second scan for each browse request will be roughly proportional to the size of SCANTIME. All this would suggest using a fairly small SCANTIME: a value of 10 might be a good starting point.

If you are setting SCANTIME for the first time in an Online, it is prudent to anticipate a 3% increase in journal usage, though the actual increase will almost undoubtedly be much less than that (probably less than even 1%).

This means that if one is using AUDIT204 for a previous run's journal, and one wants to find entries for a particular userid in a particular time interval, one can simply request from AUDIT204 all records for all users in the desired interval plus SCANTIME seconds before. By doing so, one can be certain that any messages formatted by AUDIT204 will be preceded by a message identifying the user associated with that message.

The second SirScan-related User 0 parameter is SCANPARM. This parameter is a collection of bits that indicate certain SirScan behavior.

The default for the SCANPARM parameter is X'00'.

SirScan is a full-screen utility (the SIRSCAN subsystem) that allows users in a Model 204 Online to view the contents of the journal. As of RKTools 7.7, SirScan functionality is also available in the RKWeb browser interface.

SirScan permits "ordinary" users to view journal entries generated by their own Online session, and it allows users in the ADMIN subsystem user class (SCLASS) to browse journal entries for any set of users.

The data displayed in SirScan may be filtered by date, time, IODEV, user (thread) number, and user ID string. In addition, you can request any combination of specific journal record types.

SirScan lets you view an ordinary journal data set or any member of a ring journal, including the offload data sets if they are not on tape. Even the current unflushed contents of the journal buffer(s) are included in the display, without you having to know what journal configuration is being used.

The SIRSCAN application subsystem (APSY) is distributed with a setup screen that allows the subsystem manager to limit the amount of disk I/O generated by users of SirScan from each of the six subsystem user classes. This setup screen is part of the SIRADMIN subsystem, and it can only be altered by privileged users. 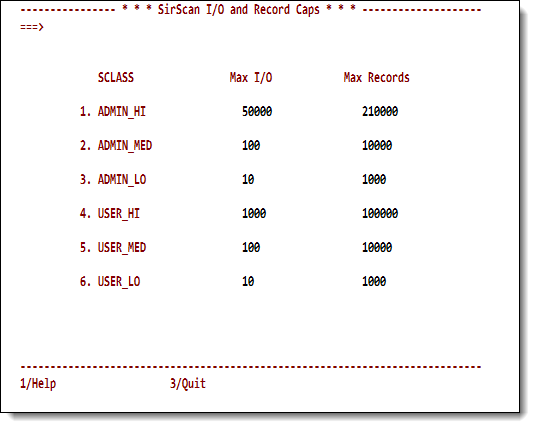 Each of the six SCLASS options is assigned a limit to the physical I/O permitted for each journal scan, and the maximum number of records SirScan will format for the user. The I/O settings prevent excessive amounts of disk activity during journal scans, and the record maximum prevents excessive use of CCATEMP. If the subsystem is semi-public, the default SCLASS value is treated the same as USER_LO for these limits.

You can change the SCLASS privileges with the subsystem management facility. The default SCLASS definitions allow users in USER_LO, USER_MED, and USER_HI to view information only for their own logon session, and allow users in ADMIN_LO, ADMIN_MED, and ADMIN_HI to view journal entries for any user.