SirMon organizes Model 204 information by system, user, file, subsystem, and task statistics, and it allows presentation of any combination of statistics within each of these five categories. This organization is shown in the figure below for the TN3270 interface, and it is largely mirrored in RKWeb. The hierarchy shown below is also extensible in both interfaces via user-defined views (SirMon custom screens). 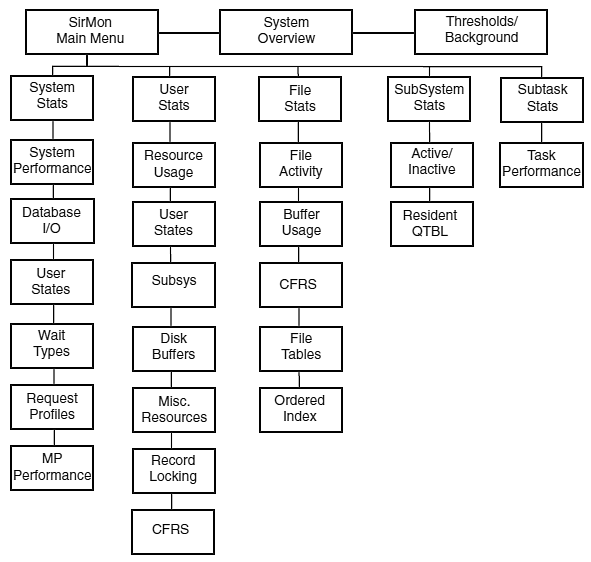 In the TN3270 interface, navigation of the SirMon system is not limited to the hierarchical menu structure. You can use the "fast path" method, bypassing the menu structure by entering transit commands in the command area of any SirMon window, as described in SirMon screens fast path. Using a fast path also works from the Model 204 command line outside of SirMon, if you precede the transit command by the APSY name, as in: SIRMON 3.7.

The tables in this section describe the standard and variable PF keys in the SirMon PF keys in the TN3270 interface. Typical browser controls provide comparable functionality in RKWeb.

The standard SirMon PF keys are:

The variable set of PF keys have functions specific to the type of screen displayed or the content of the screen itself. The variable PF keys are described below:

The commands available in the SirMon TN3270 interface include commands for scrolling, searching, sorting and limiting the display data, bumping users, and timing screen displays. Certain commands are not always available. For instance, scrolling commands only work on screens with scrollable lists of display data. SirMon commands are described below:

The TN3270 interface display formats described in this section are also present in the RKWeb interface.

Non-scrollable screens present a single line of performance data each time the screen is refreshed (the the ENTER key acts as the refresh key). The most recent line of performance data is always presented at the top and highlighted. Each previously displayed line is pushed down one until it disappears off the bottom of the screen. This screen is used to present system views, and to zoom in on selected individual users or files. 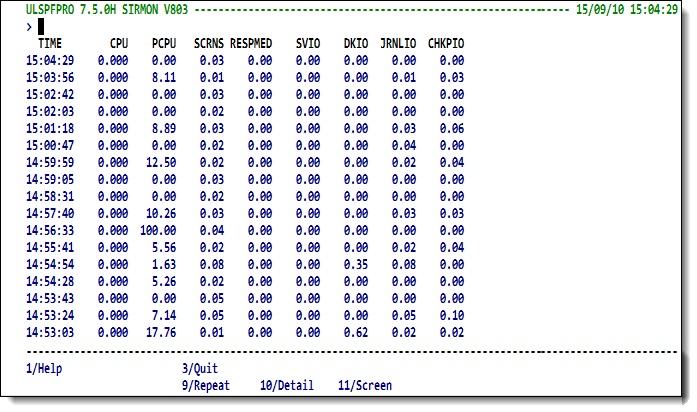 The title line of the non-scrollable screen displays, from left to right:

The top line is always the latest information, with previous snapshots being pushed down the screen.

There is no prefix command area on this screen. Commands are entered from the command line. There are no search or paging commands in this screen structure.

Scrollable screens present lists of information that can be paged through using the PF7 key and the PF8 key. Displayed data is refreshed by pressing the PF12 key. This type of screen is used to present user, file, subsystem, or task performance data. 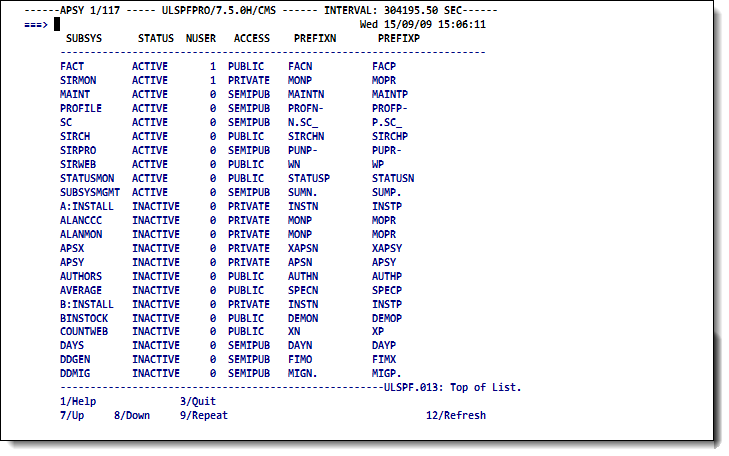 The title line of scrollable screens displays the category of measurement in the upper left corner of the screen. In addition, the title line identifies the current Online region name, the release of Model 204, the JES job ID, and the system ID. Each piece of this identification data is separated by a slash. The initial INTERVAL displayed when a user first enters any screen, is the user's connect time. Thereafter the interval is elapsed time since the last screen refresh.

To search from the current line (the top line of the display area) to the bottom of the list of users, files or subsystems, enter / or F followed by the search string, for example: /BIGFILE to find the string BIGFILE. Searching backwards is accomplished by entering -/ or -F.

The prefix command area allows bumping of users, starting or stopping of subsystems, and all other prefix commands described in the previous section.

Where wildcards are permitted in command line commands, the following wildcard conventions hold:

Since SirMon is such an important tool for monitoring performance and troubleshooting, it is useful to be able to move quickly from one screen to another. Easily done using the RKWeb menu structure, you can do so in the TN3270 interface using the "fast path" features built in to the RKTools products: you enter an equal sign (=) followed by the "screen number" in the command area of a SirMon screen, and SirMon jumps to that screen. For example, to jump to the User Monitor/Resource Usage screen, you enter =3.1 in the command area of a SirMon screen.

The SirMon screen numbers are shown below (except, of course, any custom screens you may have created):