SoulEdit runs as an application subsystem, so it needs a subsystem definition along with at least a 640K server size (750K is safer as that provides room for future enhancements and the addition of user-written macros). RKTools installation contains more information about setting up the environment for SoulEdit.

SoulEdit is built into SirPro, one of the RKTools family of products from Rocket Software, and it is accessible from the SirPro TN3270 interface.

Note: A video introduction to SoulEdit is available (for browsers other than IE/Edge): Introducing SoulEdit.

SirPro is a menu-driven application subsystem that provides tools for programmers, database administrators, and application managers inside the Model 204 environment. SirPro's primary feature set is centered on the manipulation of Model 204 procedures contained in Model 204 files.

You can access SoulEdit to edit a procedure in these ways: 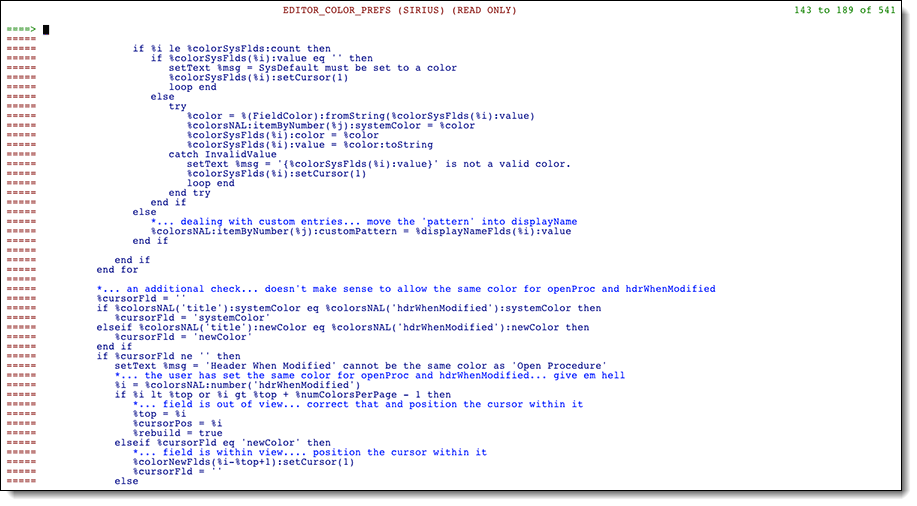 The top line shows the name of the SOUL procedure, the file where the procedure lives, and a warning if the file is in read-only mode. At the right is the range of line numbers, beginning with the current top-of-the-screen line number. The lines in the screen may be colored; colors are user-settable via the COLORS command.

Command line and PF key options for the TN3270 interface are described in the tables below.

One of the most useful features of SoulEdit is the ability to run a program with the GO command and immediately view the output in a scrollable Stringlist. If errors occurred while running, a series of AUDIT commands is available to display the audit trail output of the procedure you've just run.

Used in conjunction with the PF12 key on the run output when compilation/runtime errors occur, the following commands can be used to navigate the errors in the currently loaded procedure:

SoulEdit has a facility that lets you add command-line extensions to the editor.

As an example, INFO is a user-written command-line extension provided by Rocket Software. It provides XML-formatted information about any Model 204 system method (output from a LoadSystemMethodInfo method call). If during an ordinary editing session you type info currenttimestring into the command line of SoulEdit:

You see the output of the LoadSystemMethodInfo call displayed in a scrollable screen:

Pressing the PF3 key returns to the in-progress editing session.

The editor extensions are created via SCMD procedures stored in a user-designated file. You can see how INFO works by looking at procedure SCMD\INFO in the RKTools SIRIUS file.

To create your own commands, specify the procedure file where they will reside using the PROFILE command and Custom Macros File. SoulEdit scans this file for procedures prefixed with SCMD\ and loads them into memory at the beginning of the editing session. Copy SCMD\INFO into your Macros file with a new name, and customize the run method to your liking.

SoulEdit can take timed backups of the procedures you are editing. This feature can be enabled on a user-by-user basis with the PROFILE command. Backups are taken by default to the same file in which a procedure is being edited. Optionally a separate backup file can be specified, also using PROFILE.

SoulEdit has an auditing feature to list entries from the current journal. AUDIT options are:

The colors used by SoulEdit for displaying journal entries are taken from your SIRSCAN profile. If you do not have a SIRSCAN profile, SIRSCAN default colors are used.