The procedure list shows the procedures that fit the criteria you specified on the selection screen. 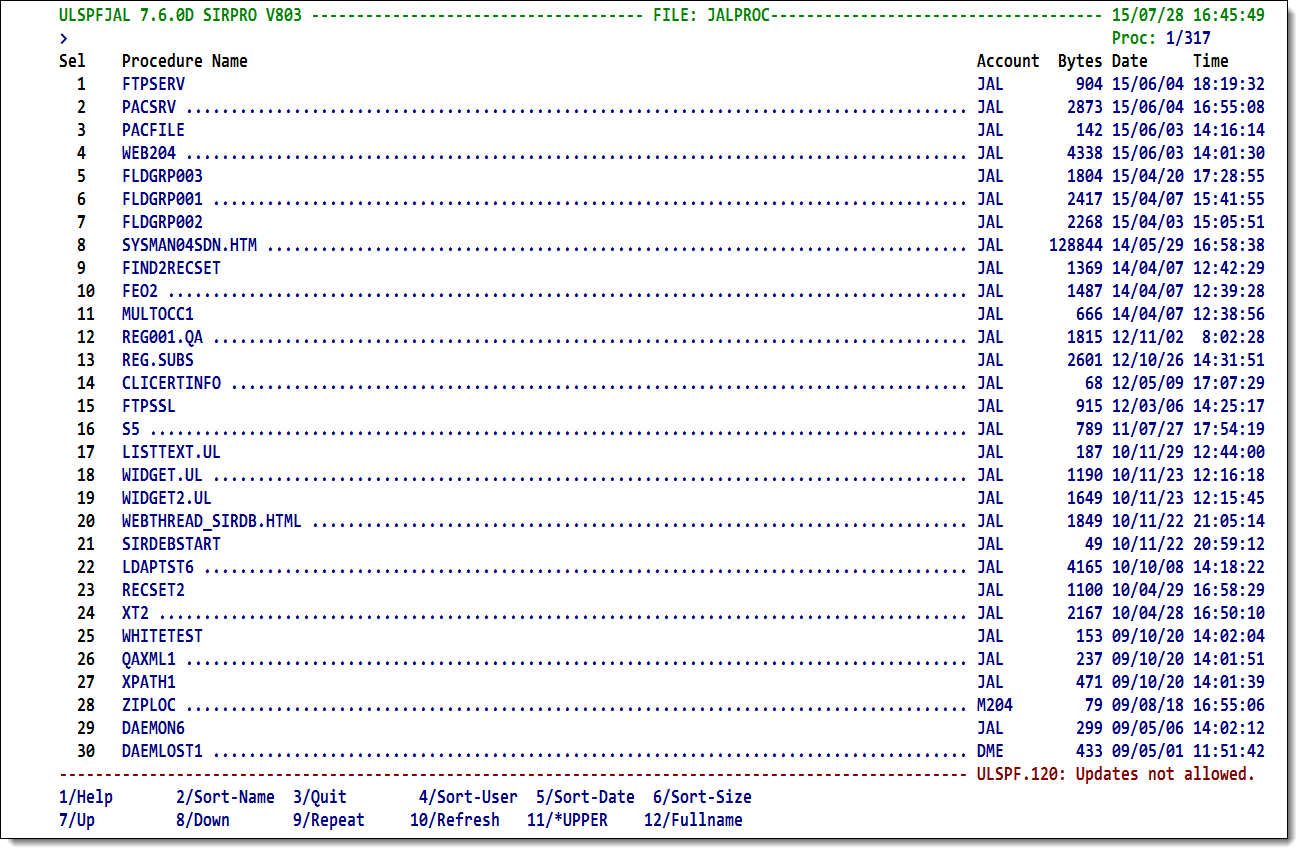 Note: You can also access this screen from any screen in RKTools by using the PL command-line command. You access a similar screen in RKWeb by selecting Build > Edit and clicking the Open Procedure List button.

To act on individual procedures in a TN3270 list, you specify single-character procedure commands in the select field (Sel) in the prefix area to the left of a procedure name. These commands are described in the following table, and the screens and processing they invoke are documented later in this page.

Note: Prefix commands and most of their functionality are not available in the RKWeb interface which uses a different editor; they can only be used in the SirPro TN3270 interface.

You may enter any number and combination of prefix commands, none of which execute until the Enter key is pressed. Deletes and Prints are done for all procedures at once. Processing for other commands is performed one procedure at a time, but with all same-type commands processed sequentially (that is, all Edits are performed, then all Browses, then all Prints, etc.) in the order in which commands are encountered from the top of the procedure list.

The display area of the screen, described below, can be toggled between a set of views. The DLIST view, similar to the view of procedures most commonly seen by User Language developers at the command level, contains the following information:

The commands in the following table are valid on the command-line of this screen. These commands are not available in the RKWeb interface.

As of version 7.5, you can string command-line commands together using a semicolon (;) as a delimiter. For example, to switch to a new file, SIRIUS, and display those procedures that have "HELP" in their name, specify:

An erroneous command remains on the screen so it can be amended.

The destination screen is displayed once for each procedure selected for Copy or Move. The screen requires entry of destination file and procedure name, and allows the procedure to be edited on the way to the new location. The source information is protected. 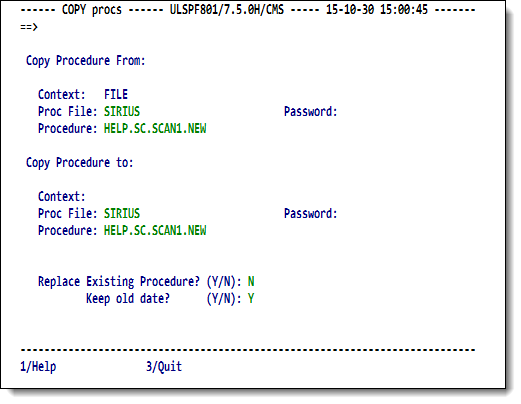 The copy screen requires input in the following fields:

Procedures selected for deletion are presented in a single scrollable list, from which you press the F3 key to cancel (and return to the list where the selections can be changed), or F12 to confirm the deletions.

Function keys are the same as on the procedure selection list, except that F10 is not active (the user must return to the previous screen to refresh the procedure list), and F12 is used as a confirmation key for the delete.

On returning to the original list, procedure information lines are overwritten with a success or failure message for the delete operation.

A variety of options are provided for printing procedures. Procedures may be routed to an output file, or to a printer via a USE printer.id command or a USE $PRINT command.

No confirmation is performed for print operations. The user is routed directly to the Print Destination screen for routing.

The Print destination screen controls output routing of the procedures, and various characteristics of the print job: 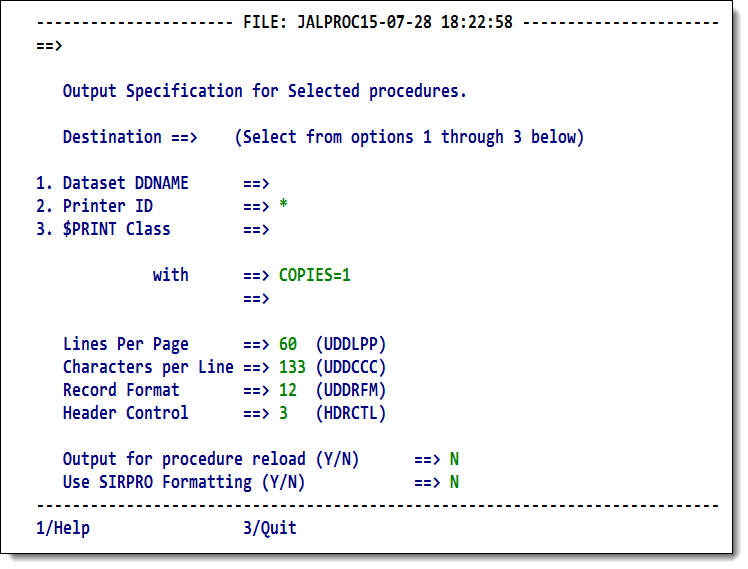 Function keys are the same as on the procedure selection list, except that F10 is not active (the user must return to the previous screen to refresh their selected list), and F12 is used as a confirmation key for the print.

If either Option 1 or Option 2 is selected, SirPro executes a simple USE command. If Option 3 is selected, a command of the following format is executed:

If the specified printer is invalid, PRINTER=LOCAL is substituted.

All user entries on the print screen are saved in the user profile except the destination.

Procedures selected for Renaming are presented one at a time. 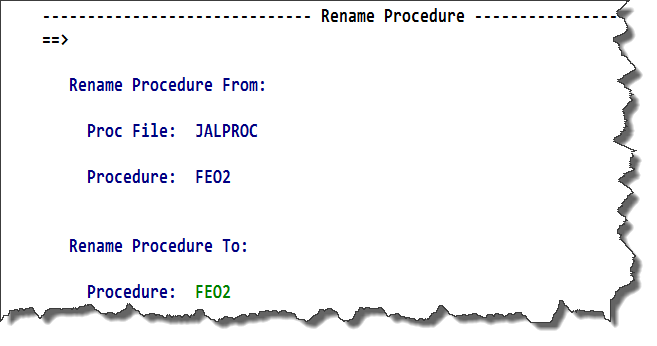 On returning to the original list, procedure information lines are overwritten with a success message for renamed procedures, and they are protected from update until the user's procedure list is refreshed. 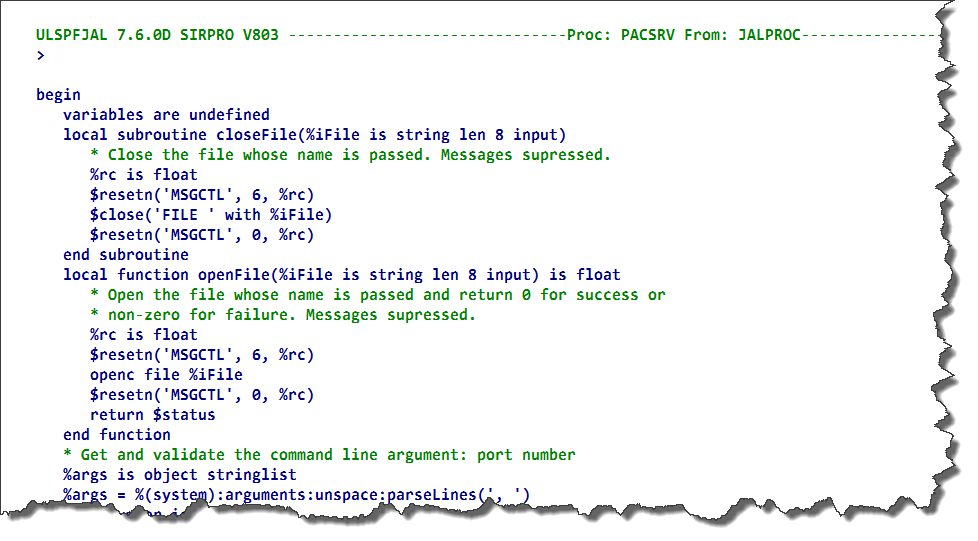 The following command-line commands are also valid, depending on the SmartBrowse session context: