The diagnostic dumps produced by SirFact are stored in base64 encoded format in Model 204 procedures inside Model 204 files. Not readable in raw format, the dumps must have diagnostic information extracted from them with the $Fact_* functions described in SirFact $functions.

While users can write their own system using the $Fact_* functions, the FACT subsystem is a ready-to-run, full-screen interface for viewing SirFact dumps.

The FACT subsystem can be accessed from the Model 204 command line by specifying the file and procedure names in this format:

The FACT subsystem can also be invoked from a subsystem that displays lists of procedures containing SirFact dumps. To transfer control from a local subsystem to FACT, use the standard application subsystem (APSY) transfer facility (the XFER global). Make sure to:

The SirPro subsystem is already configured to perform an APSY transfer (as described above) when an F prefix command is entered on the SirPro Procedure List screen:

The F prefix command in SirPro only works for sites that own SirFact. If a non-SirFact procedure is selected with an F, an error message is posted to the screen.

RKWeb is a web interface available as of version 7.7 of RKTools.

In RKWeb, selecting the Build > Fact Dump Analysis > Select option lets you display a list of SirFact dump procedures (like the one above in F command in SirPro) from which you select the dump to process.

Whether the FACT system is accessed from the command line, from SirPro or a local subsystem, or from RKWeb, the main screen displayed is the same: a scrollable display of the basic dump information, extracted from the dump. As further commands are entered on the screen's command line, their output is appended to the display, and you can scroll through the list. If you want a printed version of the output, the F12 key sends the list to a print device. 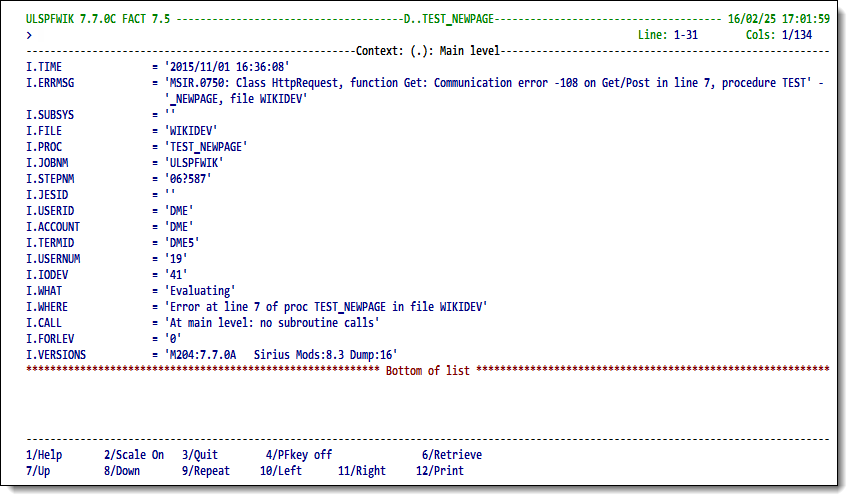 The initial FACT screen shows default context information for the error condition, including a date/time stamp, source procedure and file, user ID of the user for whom the error occurred, etc. Additional information is extracted from the dump via Display or Context commands. The output of each command is appended to the list of previously extracted data. The list of all this formatted dump information is scrollable and printable from the FACT scan screen.

Information in a SirFact dump is categorized by context within the program that is executing when the error occurs. The "context" is either a complex subroutine or the main body of the executing program. You can switch contexts within the dump file with the Context command. The Display output (described below in D[isplay] command) is sensitive to the context set by the Context command for the values and attributes of %variables, screen items, and image items.

Valid information contexts are the same as those documented for the $Fact_Context function:

The Context command adds a dividing line to the output list, and any Display information that follows applies to the current context until the context is switched again.

The Display command requests for specific kinds of data to be extracted from the current context in the SirFact dump.

The Display command specifies a series of data items. It is formatted as follows:

The valid c values are described in the following list. They are the same as for the Fact_Data function. All can be abbreviated to a single letter, except for RIN and ROUT, which require two letters. So V.%JUNK is the same as VALUE.%JUNK, and G.X* is the same as GLOBAL.X*.

You can enter the Display command and c values in any case: all non-quoted values are translated to uppercase before being processed.

After the D command is executed, a separator line is output to the screen, and the output of the command is appended to any previous output. FACT automatically scrolls the screen to the top of the new information.

The returned values from the D command contain the requested data item followed by the value. The class requested is shown in its minimum abbreviated form, except for the VALUE class, which is omitted.

In addition to simply specifying a %variable in a VALUE or LIST display, there is syntax that can (or must) be used for arrays, structures, $lists, and objects. This section explains that syntax.

The Print screen lets you specify how to route the formatted dump extract to a print device.

Most of this functionality is not available in the RKWeb interface. 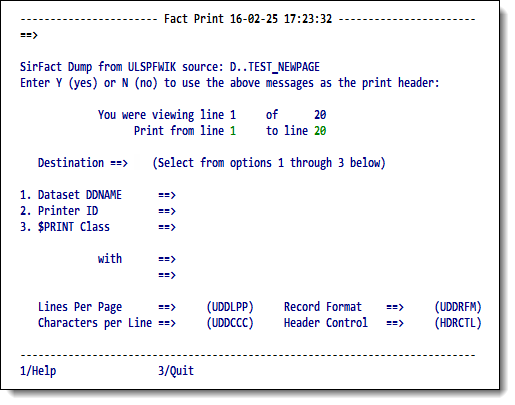 To print, enter the following information in the screen fields: